After a hard fought battle in Class 6 between four children: Ben Smith, Matthew Tucker, Harrison Powell and Isaac Horton, Mr Breeze from TK, and his adjudication team of students, chose Harrison and Isaac as our school heat winners. The two boys then went on to attend the final at Thomas Keble on Tuesday 21st June. The competition was extremely high, with a range of speeches being given by the finalists from local schools on a wide variety of topics; from ‘Being Wenglish’ to ‘Chocolate’! 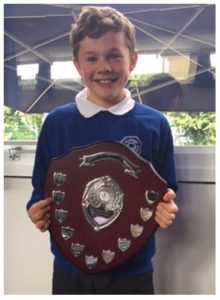 Harrison delivered a mature and clear speech about the Harry Potter series, crammed full of interesting facts and using a variety of props (including a super wand!) His subject knowledge was excellent. Isaac’s speech on ‘Music’ was heartfelt, full of passion as well as a range of fabulous vocabulary and quotes, it even included a short rendition of ‘Cheerleader’ on his cornet.

Both boys did our school proud and were a pleasure for Mr Ferguson and Mrs White to watch. After a short recess for the judges to make their decision, Isaac was announced as the winner of the entire event – congratulations to both boys for their hard work independently writing and practising their speeches, and their perseverance and courage to take part. We look forward to displaying Isaac’s trophy at school with pride in the near future.